Five years ago I participated in National Novel Writing Month (NaNoWriMo) as a way to pass the time when both my husband and I were getting a little homesick on sabbatical in the Netherlands. I got hooked on the story I wrote and have worked on it on and off since 2013, creating a 160,000 epic tale with plans for two more books percolating in my day-dreamy brain.  I have always liked writing but will not claim to be a writer. Still, the process was creatively invigorating and I really enjoyed working out some of my own philosophies in a fantasy world that I could get lost in. For this reason, I could be happy enough with my audience of one but as my allotment of free-time gets increasingly smaller, I feel the need to formalize this pursuit so that I can justify it to all the blank canvases that stare at me accusingly in my studio. Therefore I am pleased to announce the publication of my first book Keeper of Absalon for Amazon Kindle. 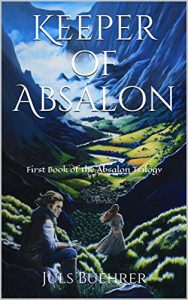 In the barren lands of Ellildin, humankind has found only one remedy for the wrath of the creators: avoidance. To worship the Ardems, as they are commonly known, is to draw their eye and, along with it, their indiscriminate blessings and curses. For this reason, the only thing a Haxin warrior is allowed to fear, indeed taught to fear, are the Ardems and any of their known haunts.

When the Heir of the Kingdom of Haxifaden stumbles upon Absalon, an unknown mountain paradise, he is horrified to find a peaceful farming community living in the shadow of an undeniably Ardem-cursed castle. There he will discover the Ardem’s true intentions toward humanity and their determination to crush man’s ever-growing capacity to disrupt the systems that make the planet habitable. What the Heir will also find in the mountains is, Eenen, the unassuming healer of Absalon, who may just be the key to humanity’s survival.